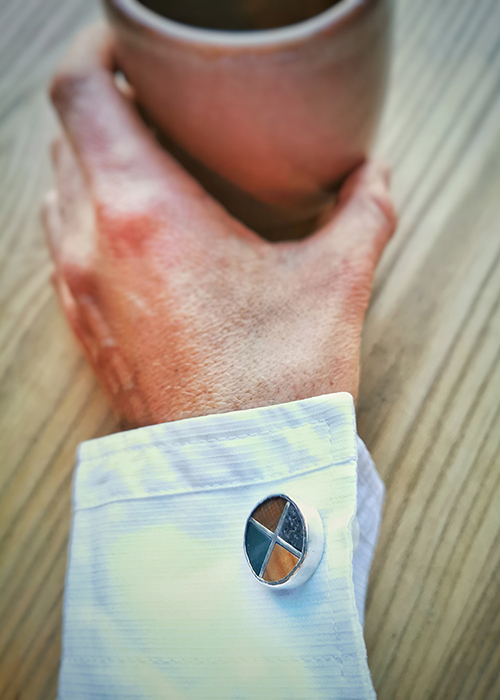 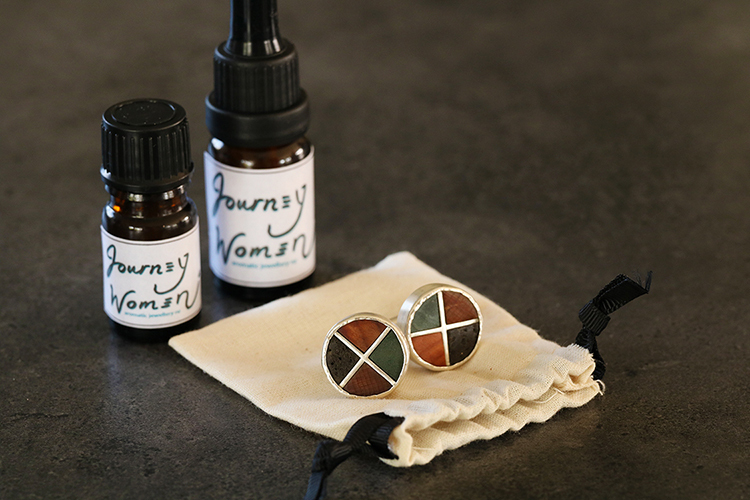 Commission for chief founder of Popup Business School Aotearoa. As participants on his course he challenged my sister (plant alchemist) and I in collaboration to create a pair of aromatic cufflinks for him.

Heavily symbolic, I drew my inspiration for the design from both his foundational tree of values, the importance in honoring the Maori culture of this land, the North American Indian medicine wheel, as well as my natural source materials. The number 4 and the elements of nature also hold symbolism.

Timber ~ Trees need water to thrive. Trees seek a way to expand and grow. Growth lines seen in timber can also represent a flow of movement outwards and inwards which is also needed to thrive and evolve.

Kauri ~ In the Maori creation myth, Tane Mahuta is the son of Ranginui, the sky father and Papatuanuka, the earth mother. As Tane grew he separated his parents (sky from earth) until he could clothe his mother with vegetation. The birds and animals were his children.

This story of the Kauri creating space for life to grow is a powerful lesson in courage. Now is a time to separate ourselves from forces that could be containing us to create a new space for life to unfold. The ancient spirit of the Kauri reminds us that it takes courage to attain our goals, especially those we are most passionate about. Kauri signals a time of taking action in the pursuit of these goals.

Rimu (Red pine) ~One of NZ’s finest timbers, second only to Kauri. A member of the ancient Podocarp family whose lineage stretches back to a time when the NZ landmass was still part of the supercontinent Gondwana.
Maori used it in the manufacture of canoes, weapons, especially heavy-duty long spears, and for a variety of medicinal purposes.

Stone ~ Argillite (Pakohe) stone (green or grey in colour) is one of the basement rocks (along with Greywacke) of NZ and some deposits are over 300 million years old. Physically bedrock is the solid rock which holds up all that is above, figuratively it is a fundamental principle on which something is based.

Basalt stone (black or grey in colour) is volcanic rock commonly used in the construction and roading industries. A characteristic is vesicles (open cavities that represent escaped gasses). This humble stone has enabled people to get from one place to another more easily in daily life.

*Balinese lava stone is often used in popular fashion culture as aromatic jewellery due to its porous nature and ability to absorb essential oils. Basalt is a sustainable option offered locally in NZ.

The medicine wheel; a circle split into four quadrants each representing a specific direction.

In many native cultures across the North American continent, there is a unifying spiritual element that has been used for millennia to bring wisdom and healing to the people called the medicine wheel.

This multi-dimensional frame of reference can take many forms, but is usually depicted as a circle split into four quadrants that each represent a specific direction. North, East, South and West. Each direction carries deep meaning, far beyond just the physical navigation of the world around us. They symbolize specific components of the inner landscape that we all possess, and each holds gifts that can be used to better understand ourselves.

All cultural references have been shared with complete respect for the lineages from which they come.

My client lost his original gold and platinum wedding ring, and as a passionate environmentalist and tertiary educator looking to find solutions to the abundance of plastic in our oceans, he decided he wanted to replace it with something that would be a talking point and as he put it, create a disruption.

He collected plastic off the beach near where he lived and gave it to me to somehow combine with  NZ greenstone (which he had always wanted in a ring). I decided to slightly melt (with an iron) and flatten the plastic before layering the plastics together and encasing them in resin.

This brief required 3 rings to be created in total, one from greenstone, one from the plastic and resin, and the internal one from silver. This kind of project is what I get excited about because this sort of concept and problem solving challenge is what art school has trained us for and what I thrive on! 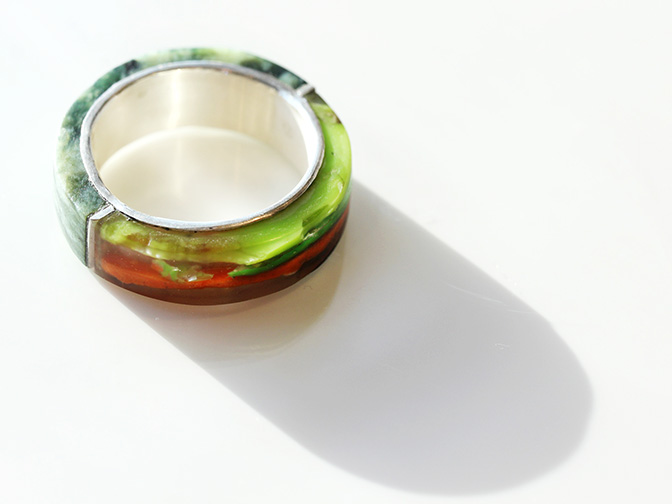 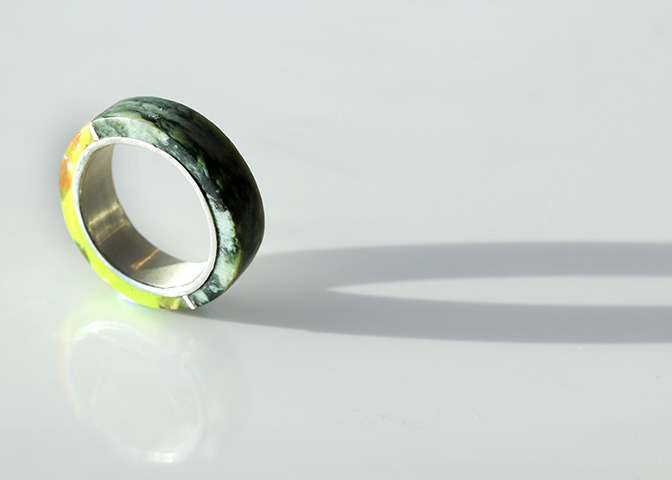 This is an example of another bespoke piece made in 2016.

Contact Kylie to chat about commissioning a unique contemporary design as a personalised piece or token. 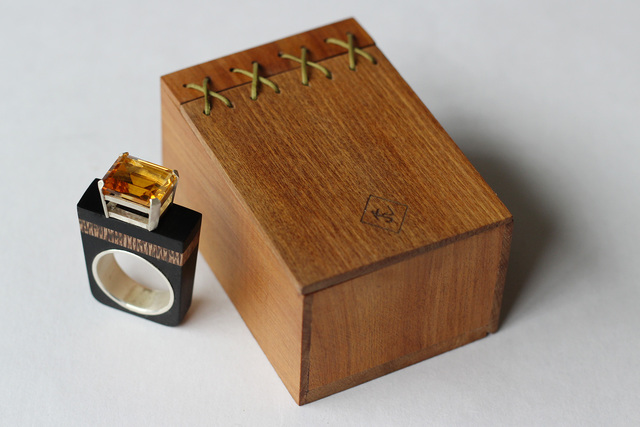